Get Medical Marijuana
Card in Rhode Island in 5 minutes 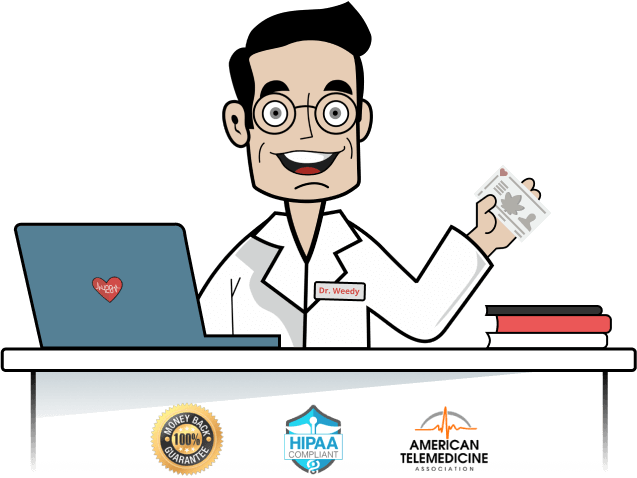 How to get medical cannabis in Rhode Island

Wait for approval of your application and receive the card to the address indicated in the application within 2-4 weeks.

Get a Medical Marijuana card in Rhode Island i

A Simple Online Process
No appointment necessary. Our doctors are available to help you get certified for medical cannabis from 8am to 10pm, 7 days a week.

TALK TO A MEDICAL DOCTOR
Your payment information and patient status is protected by HIPAA and will never be shared with anyone or found on any public record or database.

1 Year Certification
If approved, the doctor will issue you a certification and instructions on how to register with the state and access medical cannabis dispensaries and products. With Dr.Weedy, you're always in good hands.
Get my Rec

The medical marijuana program in Rhode Island significantly improves the life quality of the patients, relieving a wide range of severe symptoms. In cases where the doctor considers that the potential benefits from the use of medical cannabis exceed the health risks, he/she gives out the prescription for a medical cannabis card. The participant of the program has the right to buy medical marijuana in the specialized dispensaries legally. The availability of the card is a prerequisite for making purchases (both for the patient and for the caregiver/authorized buyer).

Medical cannabis has been legal in the state since 2006, when Edward O. Hawkins and Thomas C. Slater Medical Marijuana Act was adopted, which actually decriminalized medical cannabis. The law protects the right for use, cultivation, and storage of weed in the amount of up to 12 adult plants, 12 plants in the vegetative stage of maturation, and 2.5 ounces of dry hemp cones. At the same time, as of 2020, recreational cannabis is illegal in the state. In this, local authorities made attempts to adopt a so-called law “About adult cannabis use”, but at the moment, the bill has been not supported. Meanwhile, the state has excluded criminal liability for the storage of 1 ounce of cannabis, limited to a civil offense followed by a fine.

Hawkins and Thomas C. Slater Medical Marijuana Act were adopted in 2006 to regulate the medical use of cannabis legislatively. The basic rights of patients requiring cannabis therapy were spelled out in it. It also contains the basic terms, such as caregiver and authorized buyer. To date, the Rhode Island Department of Health is guided by the law of Edward O. Hawkins and Thomas C. Slater in its actions aimed at regulating the field of medical cannabis.

100% guarantee of money back
You pay only if you are approved After approval, you will receive an invoice for payment - this has to be written in process of order

Appointment 100% Online only
There is no need to visit the doctor offline. Just apply through the order form.

The Most Popular MMJ Clinic In Rhode Island
We believe that medical cannabis saves lives, and that any person that can benefit from the wide variety of therapeutic uses it can offer should be able to access to the medication.

Easy, Fast and Cheap process
Submission of application in the most convenient option for patients. Fast response of doctors and the lowest prices in the state.
Get MMJ Card

Any resident of Rhode Island who has been diagnosed with one of the following pathologies have the right to participate in the medical marijuana program:

STORIES OF OUR PATIENTS 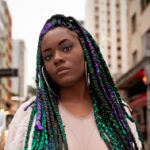 Mary V.
I live with my grandmother, and she is already at a very respectable age - she is 88 years old. She has Parkinson's disease and therefore she almost cannot be alone without permanent care. In addition, because of such an elderly age, she has many other health problems - starting with chronic pain in the joints and ending with poor eyesight. Previously, I had to spend... Read more 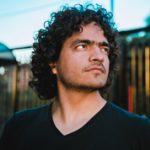 Dack T.
For several years now I have had a positive HIV status, which, of course, is fraught with certain difficulties in finding work and in contacting people. Found out my diagnosis, I spent a long time at home, alone with myself, disappearing in my depressive thoughts for days. In the beginning, I even felt uneasy about telling my problem to my friends, so in just a few weeks I lost almost all contact with them. In the end, I realized that... Read more 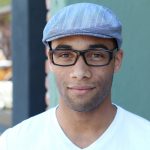 Steve M.
Four years ago, I was diagnosed with liver cancer, so for two years I practically fell out of life - I underwent several operations and chemotherapy courses, after which I lay for weeks at home under droppers and just looking at the ceiling... Read more

By law, patients and caregivers have the right to cultivate up to 12 cannabis plants in the flowering stage and up to 12 plants in the vegetative stage, as well as to store up to 2.5 ounces of dry hemp cones. Exceeding this limit will be classified as a criminal offense and can entail a fine or even a prison term. Cannabis cultivation must be performed in such a way that strangers can’t see the cannabis plants on your site without binoculars or other special equipment.

Patients and caregivers participating in the medical cannabis program of Rhode Island have the right to buy weed legally from the licensed dispensaries. Weed sales dynamics through the dispensaries indicate an intensive development of this market. In particular, in 2019, the dispensaries of Rhode Island sold medical cannabis valued at $56 million, while in 2018, this figure was $17.8 million (data of the top marijuana regulator Norman Birenbaum). To date, sales points of cannabis are relatively evenly distributed throughout the state, so it is easy to find a seller in the vicinity of your home or office. For this, use the map of dispensaries in Rhode Island. 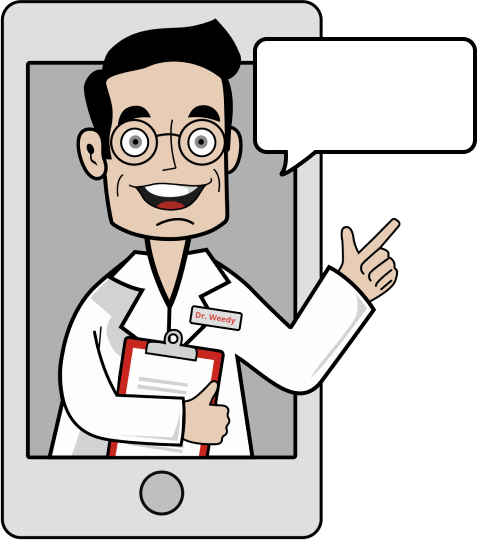 Benefits of getting MMJ card in RI

Any adult resident of Rhode Island can participate in the medical marijuana program (as well as the minor persons in the presence of a caregiver – a parent or other guardian). Under the medical cannabis program, the person can be registered as a patient, a caregiver, or an authorized buyer. A patient who, for objective reasons, can’t buy or grow cannabis on his/her own, can appoint 1 authorized buyer and 1 caregiver. The caregiver must be appointed to the persons under the age of 18. In this, the caregiver is allowed to have no more than 5 wards, while an authorized buyer can only be associated with one patient. Patients who have written confirmation of the doctor about the benefits of cannabis as a part of therapy are exempted from criminal liability for the use and storage of cannabis. In this, you shouldn’t forget that federal law considers cannabis as a drug. In addition, driving under the influence of marijuana cannot be justified by the patient’s status and is punishable by law. As for consuming weed in public places, here, the patient is also restricted by law.

According to the law, a doctor practicing on the territory of Rhode Island has the right to prescribe a patient access to medical cannabis. This category includes doctors, general practitioners, nurse practitioners, medical professionals, or qualified consultants on patient cards. Medical specialist independently decides on the recommendation of medical cannabis based on the expected therapeutic effect. Keep in mind that not all medical specialists in Rhode Island are loyal to cannabis. Therefore, you should contact the specialists, who use marijuana as a part of complex therapy or as a supportive product for their patients.

Appointment of a caregiver

Patients who can’t buy or grow cannabis on their own have the right to appoint a caregiver. This must be a person who meets the following criteria:

The fact of residency can be confirmed by attaching the copy of one of the documents:

Then, all you need is to deposit $100 of the caregiver contribution. If you or the patient enclose evidence that you have benefits, such as:

-Medicaid Supplemental Security Income
-Social Security Disability Income
-Veterans disability
-Federal railroad disability,
then the fee will be only $25.
Such confirmation can be obtained on the official website www.ssa.gov.

Extension of the medical cannabis card in RI

To extend the MMJ RI card, follow the algorithm below:

If you don’t have any general practitioner in Rhode Island – contact “Dr.Weedy”.

How Long Does The Weed Smell Last?
Cannabis is a unique psychoactive plant that has a pronounced and quite specific aroma. After smoking marijuana indoors, you can smell a persistent smell of weed,…
Read more 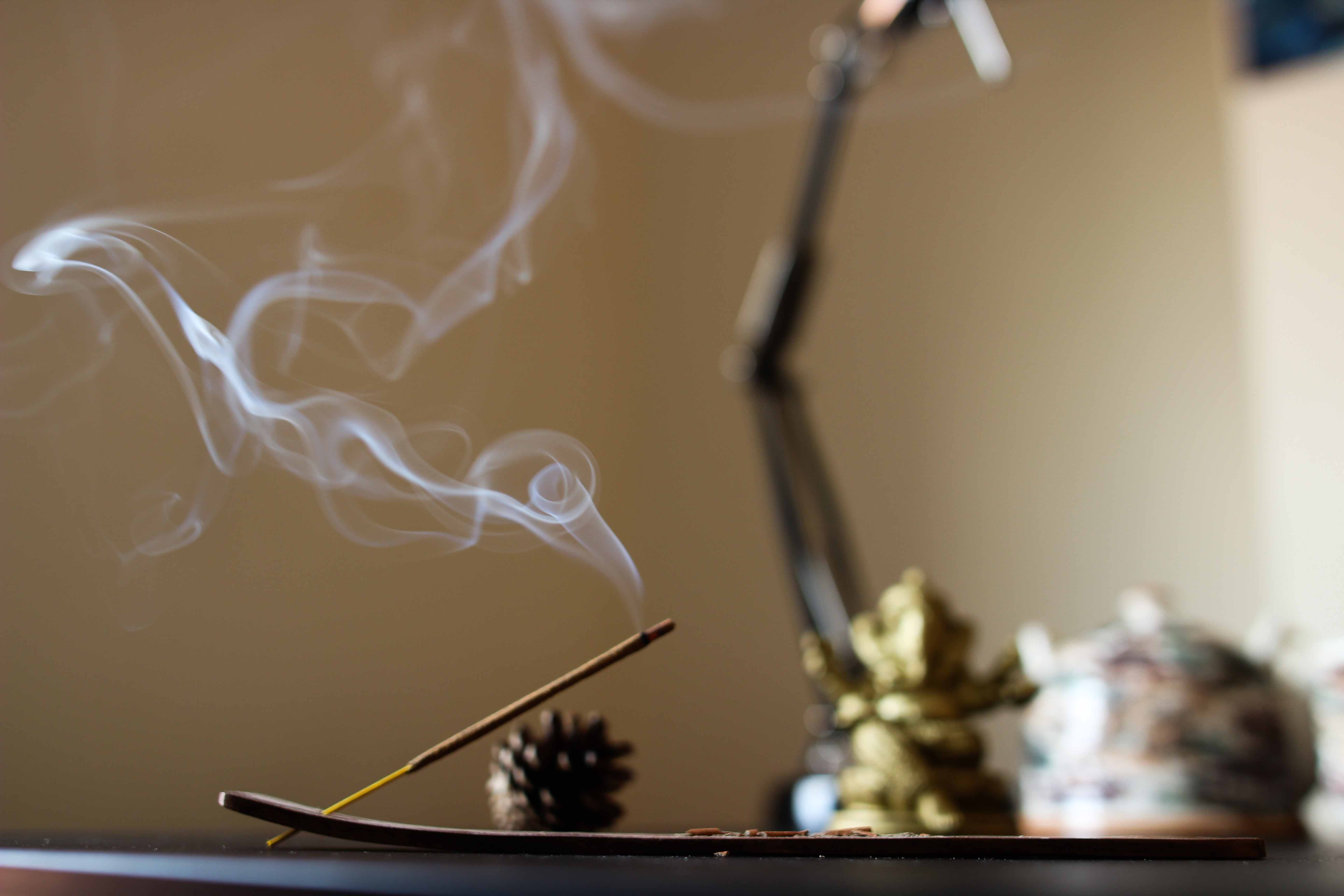 How To Hide Weed Smell In Your Room?
Many smokers who prefer to use weed at home try to find out how to remove the smell of weed from their smoky room. Even…
Read more 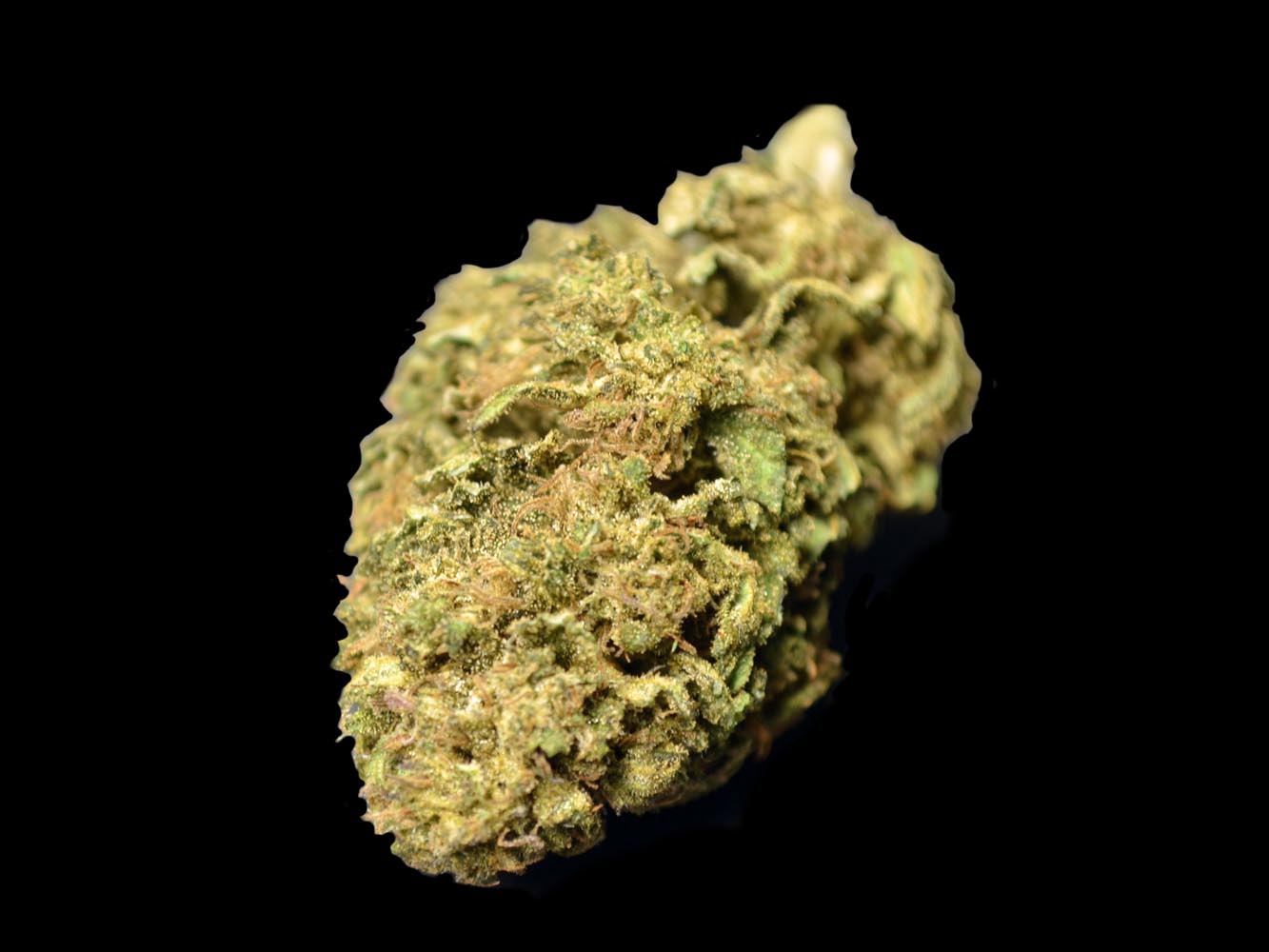 The Best CBD Strains 2020
CBD weed strains are a novel popular and effective form of treatment for many medical conditions, such as insomnia, pain, nervous system degeneration, etc. Unlike…
Read more

How To Hide Weed Smell In The Car?
If you smoke weed in the car – it would be nice to care about the removal of the acrid smell of cannabis from the…
Read more 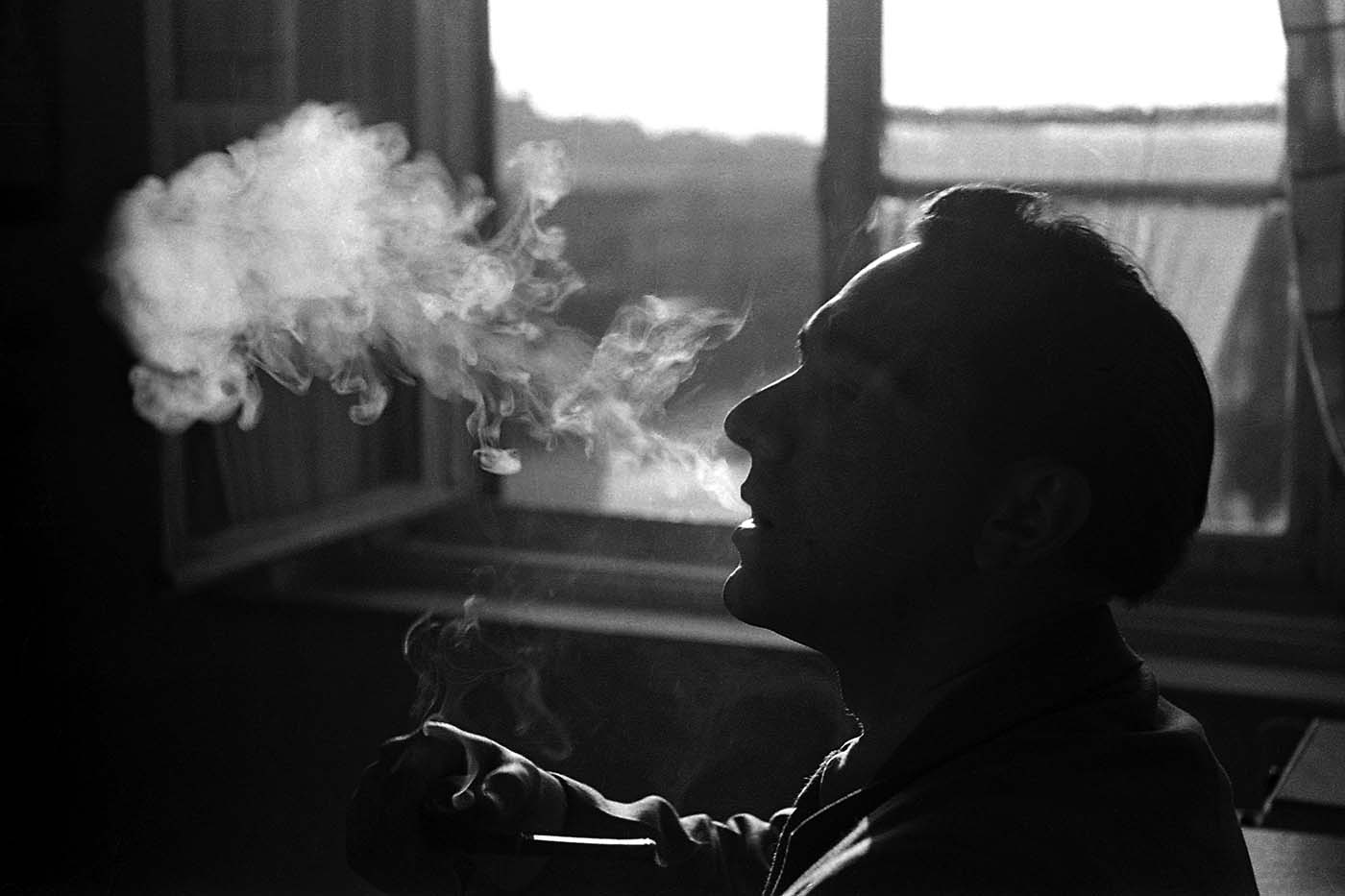 How To Smoke Weed And Not Smell?
Cannabis is considered one of the most fragrant plants, so it is not surprising that the smoke from smoking weed penetrates into a variety of…
Read more

Why Is Marijuana Smell So Strong?
Marijuana is dried cones of cannabis that have a psychedelic effect when smoked. Most often, marijuana is smoked through a homemade cigarette (joint), pipe, or…
Read more

We are in these States 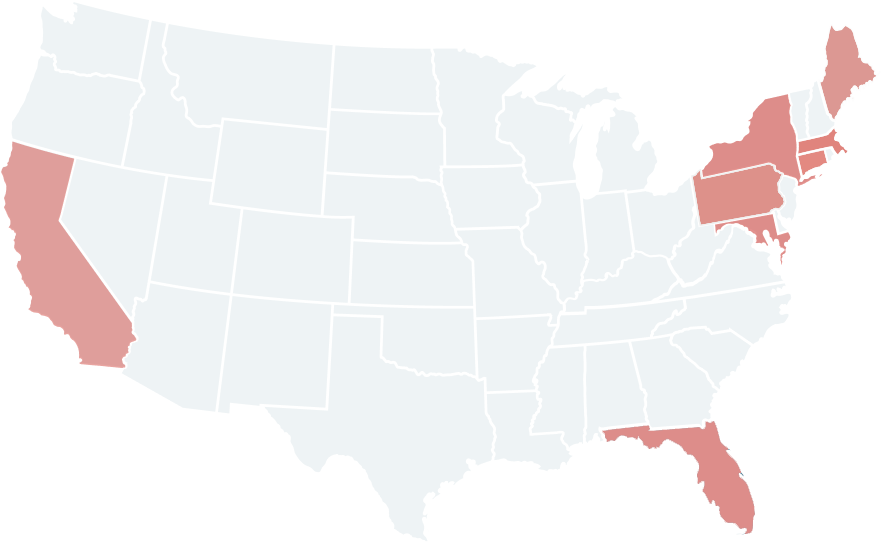