Virginia MEDICAL CARD
Get started
Get started
Get medical MJ Card
Follow us:
Recent posts: How CBD Influences Serotonin Hormone The Effect Of CBD For Acid Reflux Treatment Is CBD Effective For Menstrual Pain Relief? Cannabis Genetics In The Future Cannabis At The Service Of Humanity
Get 15% Off on Medical Marijuana Card! Use Code DRREAD15 Learn more
Medical Marijuana Card / Blog / Cbd-for-the-treatment-of-lung-diseases

Over the past decade, there has been a growing interest in the medical use of such a substance as cannabidiol (CBD). As an active ingredient of cannabis, CBD has a positive effect on the condition of patients with different pathologies. Modern medicine has demonstrated that CBD (which, unlike tetrahydrocannabinol, doesn’t have a psychoactive effect) significantly improves the life quality of patients with severe debilitating conditions. And what about lung diseases?
I have a friend who suffers from coughing fits for a long time. Due to his neurological condition, he has been taking CBD for several weeks now. I wondered if his cough was related to this? After all, CBD is also used to treat lung diseases. I decided to do a little research and find out if taking cannabidiol in various forms helps to treat lung diseases. And also whether CBD has a negative effect on lung function. Let’s talk about this.

Can you use CBD for the treatment of lung diseases?

Despite the huge number of positive reviews from patients with lung disorders regarding the use of cannabis, this substance has not been studied enough to declare its effectiveness and safety. However, today cannabidiol is recommended and prescribed for the treatment of different pathologies, including:

In states where medical cannabis is legalized, doctors freely prescribe CBD-containing drugs (including special strains of medical marijuana) for the treatment of patients with the above-mentioned conditions. The loyalty to the CBD is explained by its natural anti-inflammatory property, which helps patients control the disease (especially during an exacerbation).

At the same time, doctors’ opinions on the efficiency and safety of CBD in the treatment of lung disease have divided. There are not many studies in this area. However, Western medical practice demonstrates that today there is no reason to consider CBD as a component with anti-inflammatory properties and that it is ineffective in the treatment of a number of pathological conditions.

The medical cannabis industry offers a wide range of CBD-containing drugs. These include: 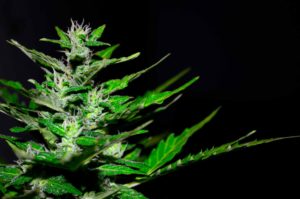 There are a few studies on the use of CBD for the treatment of lung diseases. Particularly, animal studies (on guinea pigs) from 2015 confirmed the ability of the substance to open the bronchial tubes. This allowed deepening the study of the effects of CBD in the treatment of chronic obstructive pulmonary disease. The anti-inflammatory effect of cannabidiol alleviates the shortness of breath in patients with COPD and maintains normal blood oxygen level. This gives Western doctors the reason for the wider use of CBD-containing drugs in the treatment of pulmonary diseases.

Another study (conducted in 2014) in mice with damaged lung tissue found that cannabidiol has significant anti-inflammatory effects. Scientists have concluded that CBD greatly improves lung function in case of inflammation.

However, studies involving human patients are of the greatest interest in the research of the positive properties of cannabis. There was an interesting medical experiment involving an 81-year-old lung cancer patient treated with CBD. Research showed a beneficial effect of CBD oil. As a result of the relatively short administration of the drug, scientists managed to record a significant decrease in the size of the tumor. These findings once again confirm the anti-inflammatory properties of cannabidiol.

This conclusion is strengthened by the results of a pilot study of 2020, which revealed a connection between CBD oil and the severity of COPD on a cellular level. Research has shown the ability of cannabidiol to support the immune and anti-inflammatory responses of the human body. Therefore, progressive medicine is increasingly using CBD-containing drugs in pulmonary practice, confirming the benefits of medicinal THC-neutral marijuana strains.

Are there any side effects?

CBD has almost the same side effects as cannabis, namely:

Meanwhile, practice demonstrates that if the patient realizes that he/she is taking a CBD-containing drug and is ready for the above-mentioned side effects, it makes the treatment easier. CBD can cause the following adverse effects:

Keep in mind that there is still no research regarding the long-term side effects of CBD. Moreover, it is unknown how cannabidiol interacts with other pharmaceutical preparations. Therefore, you should consult with a doctor before starting the treatment with cannabidiol. Self-medication with CBD is not recommended.

CBD is increasingly used as an alternative treatment for lung diseases. Advanced studies in this area and the development of medical practice contribute to the popularization of medical THC-neutral marijuana. However, patients with pulmonary pathologies shouldn’t decide independently on the use of CBD. This substance must be taken only on the doctor’s prescription.