Virginia MEDICAL CARD
Get started
Get started
Get medical MJ Card
Follow us:
Recent posts: CBD For The Treatment Of Lung Diseases How CBD Influences Serotonin Hormone The Effect Of CBD For Acid Reflux Treatment Is CBD Effective For Menstrual Pain Relief? Cannabis Genetics In The Future
Get 15% Off on Medical Marijuana Card! Use Code DRREAD15 Learn more
Medical Marijuana Card / Blog / What-is-the-difference-between-medical-and-recreational-weed

What Is The Difference Between Medical And Recreational Weed

The simplest answer for the question “What is the difference between medical and recreational weed?” is that they are the same thing. Any marijuana can be medical if used for medical purposes, the same goes for the regular one. However, there is a number of aspects that are worth knowing. The most important issue is whether you are buying or using pot in the state where it is allowed, or where it is outlawed. Let’s see this and a few other questions in more details.

The History of Marijuana 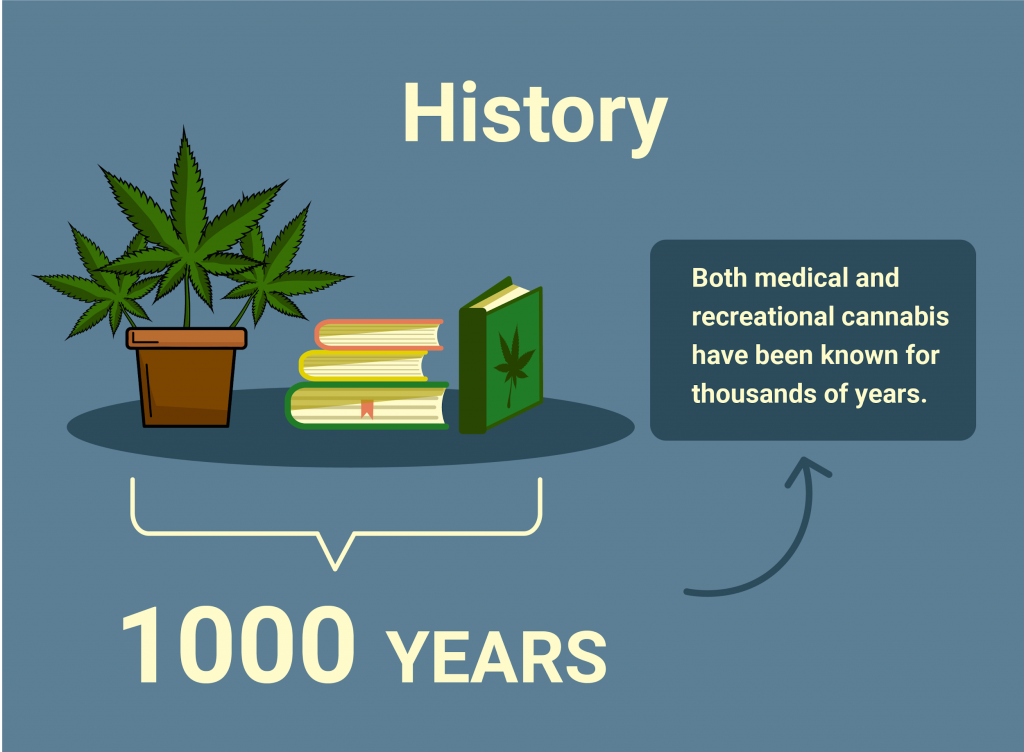 Marijuana have been known for thousands of years, both its therapeutic and recreational effects. Here are some facts of the history of weed:

Marijuana was brought to the United states in the beginning of the 20th century by Mexicans. In the early 1930’s, it was prohibited by law for both uses, and the legalization of marijuana began in 1996, when California and Washington allowed it for certain severe medical conditions. 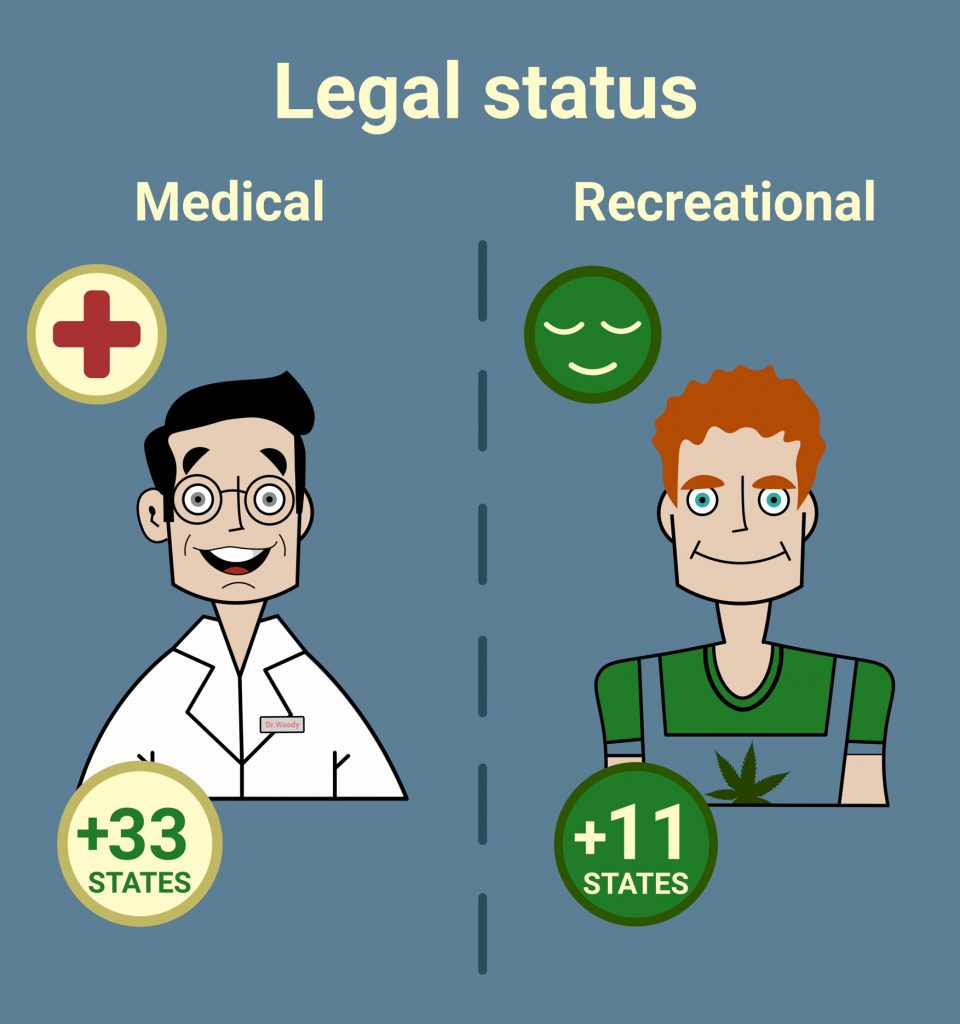 There is one common thing true for both medical and regular marijuana is that it is outlawed by the US federal law. It means that you should think twice when going traveling with weed from state to state. There are only 33 of them where you can buy and use it legally, but only for health-related purposes. You’ll want to have your MMJ card and a doctor’s prescription to prove that you are not breaking the law. There are 11 states with medical and recreational weed allowed for use, possessing, and even growing. There you can smoke pot at your own leisure, without any cards or documents.

Chemistry of Medical vs Recreational Weed 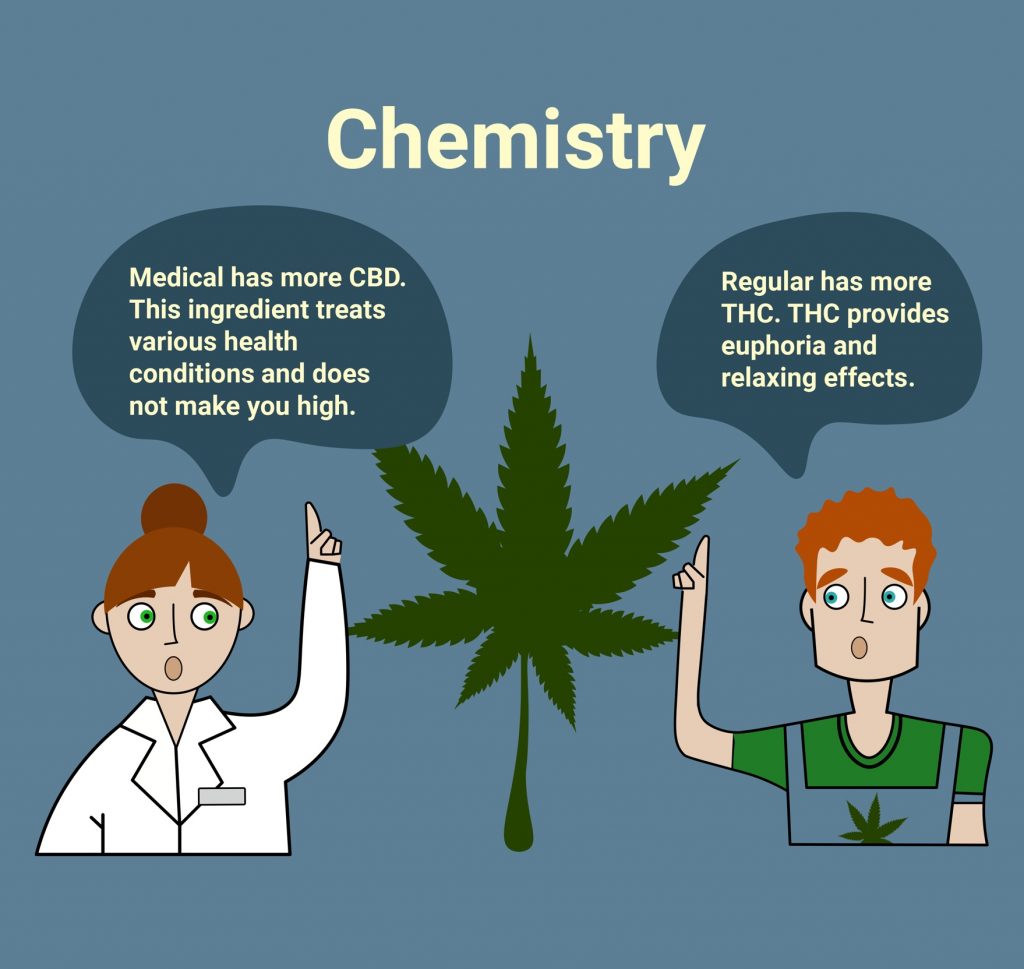 Marijuana has two main working chemical compounds — CBD and THC. The former is the one that has all healing power and this is why medical weed is rich in cannabidiol. On the contrary, if you want to feel high, you’ll need the strains of marijuana that contain more tetrahydrocannabinol. This working ingredients affects the brain, providing relaxation and euphoria. 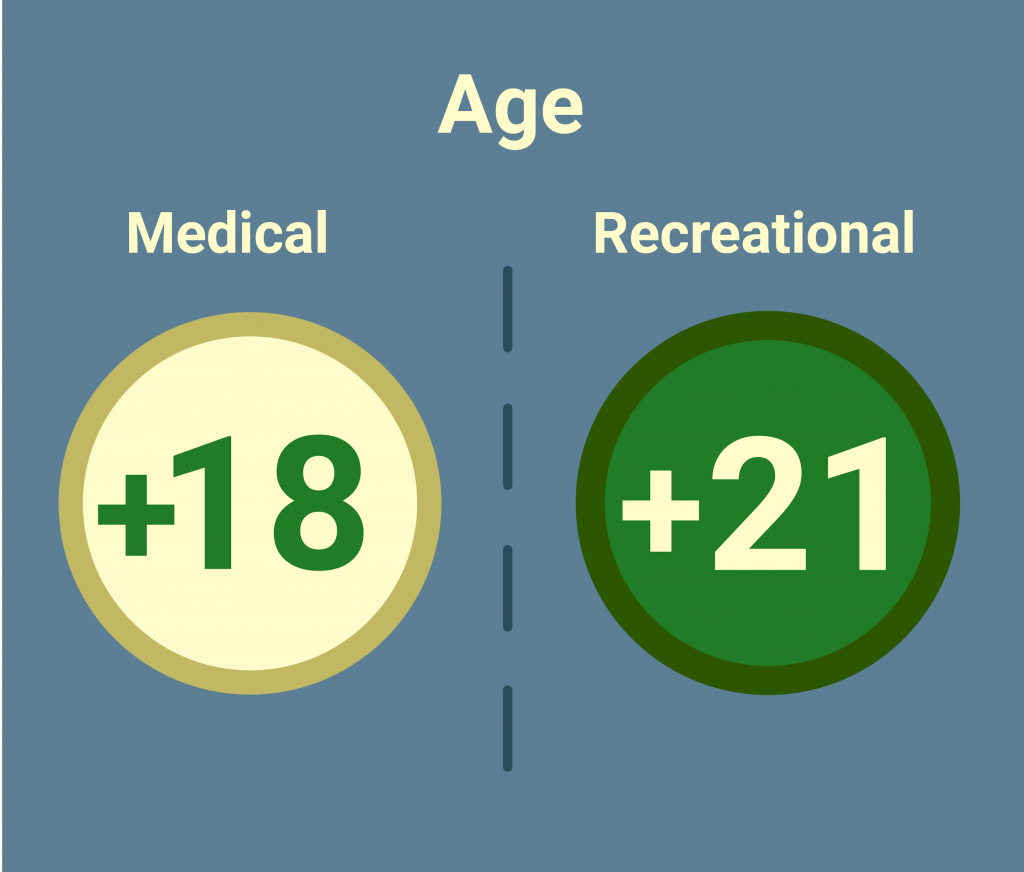 This is another significant difference between medical and recreational weed. Commonly, marijuana is allowed only for adults. But you have to be at least 18 years old to use it for health conditions, and in case of serious problems a doctor can prescribe cannabis to kids. As for the regular hemp, you cannot buy, possess, or use it before you turn 21.

How to Buy Medical and Recreational Cannabis 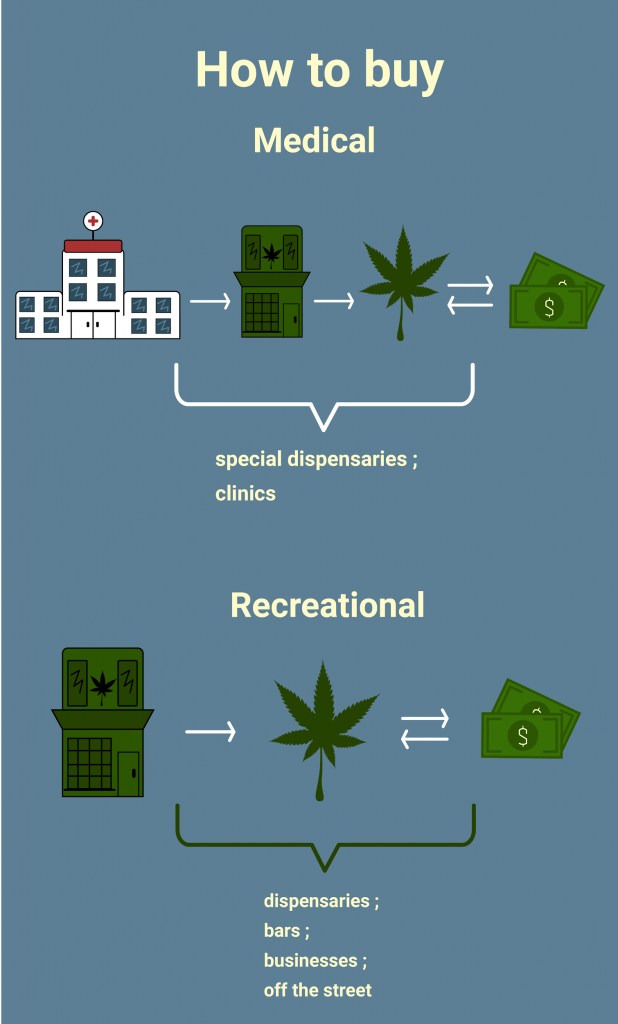 You can buy medical cannabis only in special dispensaries and clinics. For this, you’ll need:

Everything is much easier with the recreational pot as long as you are in a friendly state. It is sold in bars, cafes, dispensaries, and other businesses.

How Much Is the Weed — Medical vs Recreational? 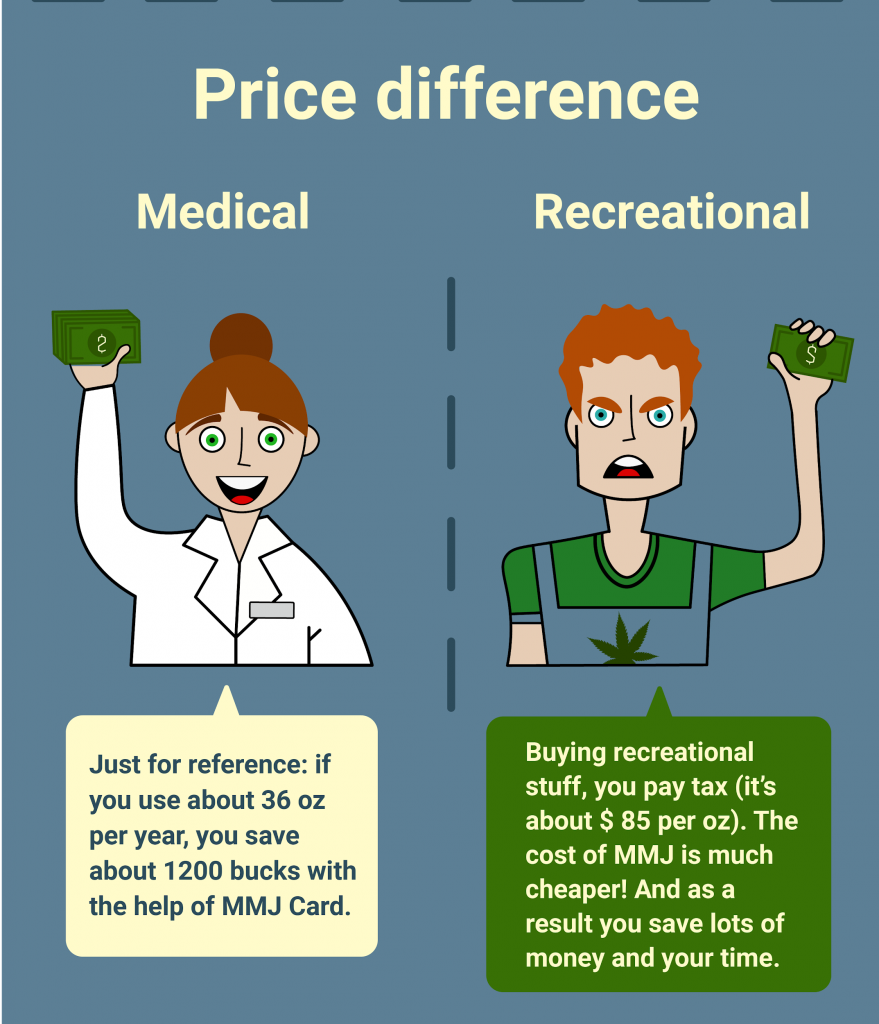 The price of weed varies from state to state, but it is similar for medical and regular products. However, MMJ card holders save lots of money on marijuana. It happens because of tax difference. Let’s compare:

The luckiest people live in Alaska, where the tax rate is zero for both. California has 7.25% tax rate for recreational pot. In dollars, it makes more than a thousand dollars of savings per year. 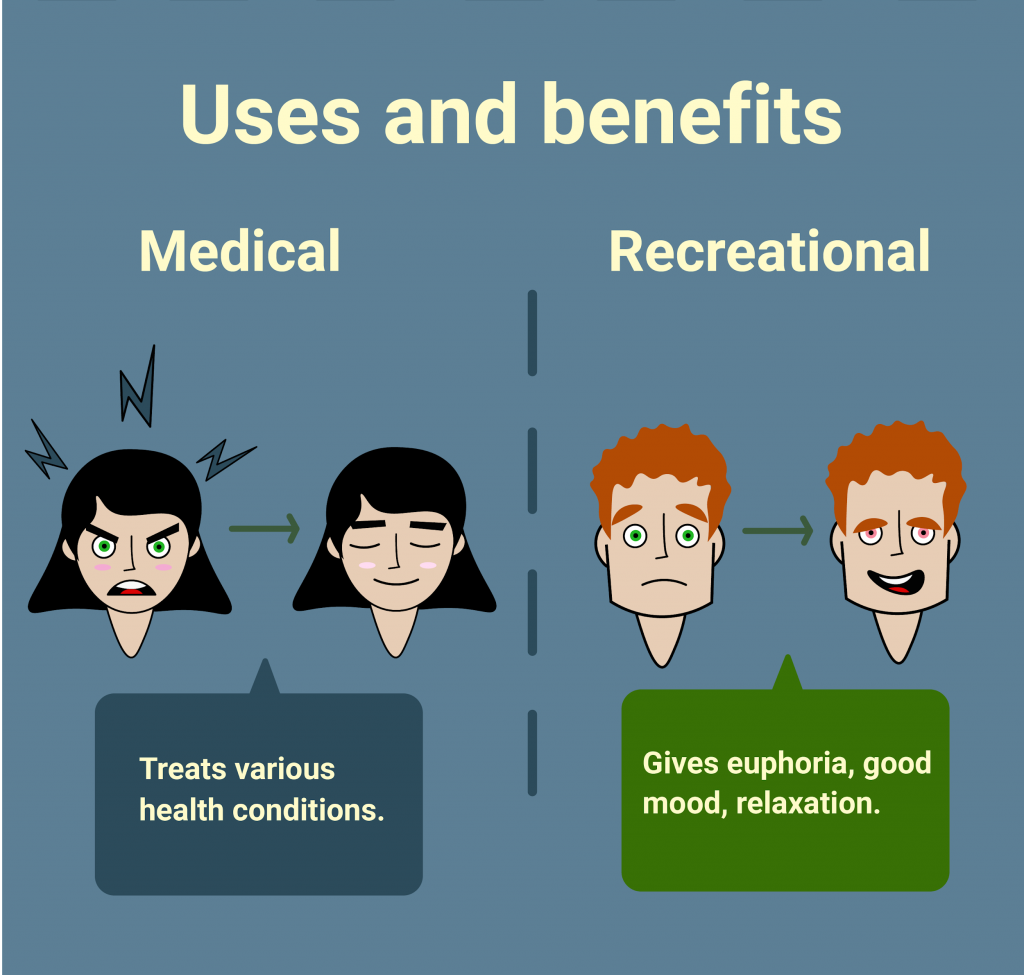 Regular weed is used to get high. Smoking joints or eating cooking brings fun, relaxation, and good mood, and helps us to socialize. Medical cannabis is taken to improve health and mitigate manifestations of various diseases:

There are many more of MMJ indications, you should ask your doctor for details. 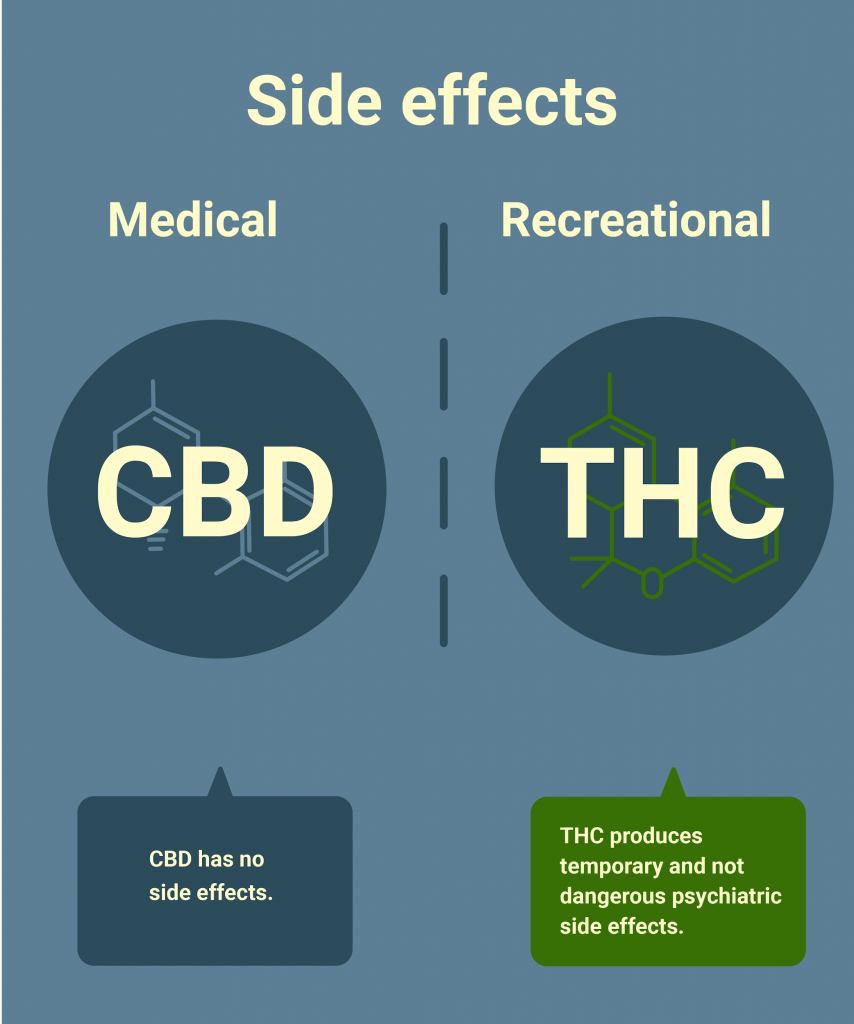 Comparing side effects of medical marijuana vs recreational marijuana, we can see that both are relatively safe. CBD does not cause any adverse reactions, while THC can alter thinking, make you hunger, happy, afraid of something, put you to sleep, etc. None of these side effects is life threatening or even dangerous, and all of them pass with time.

How to Use Weed Responsibly — Recreational vs Medical 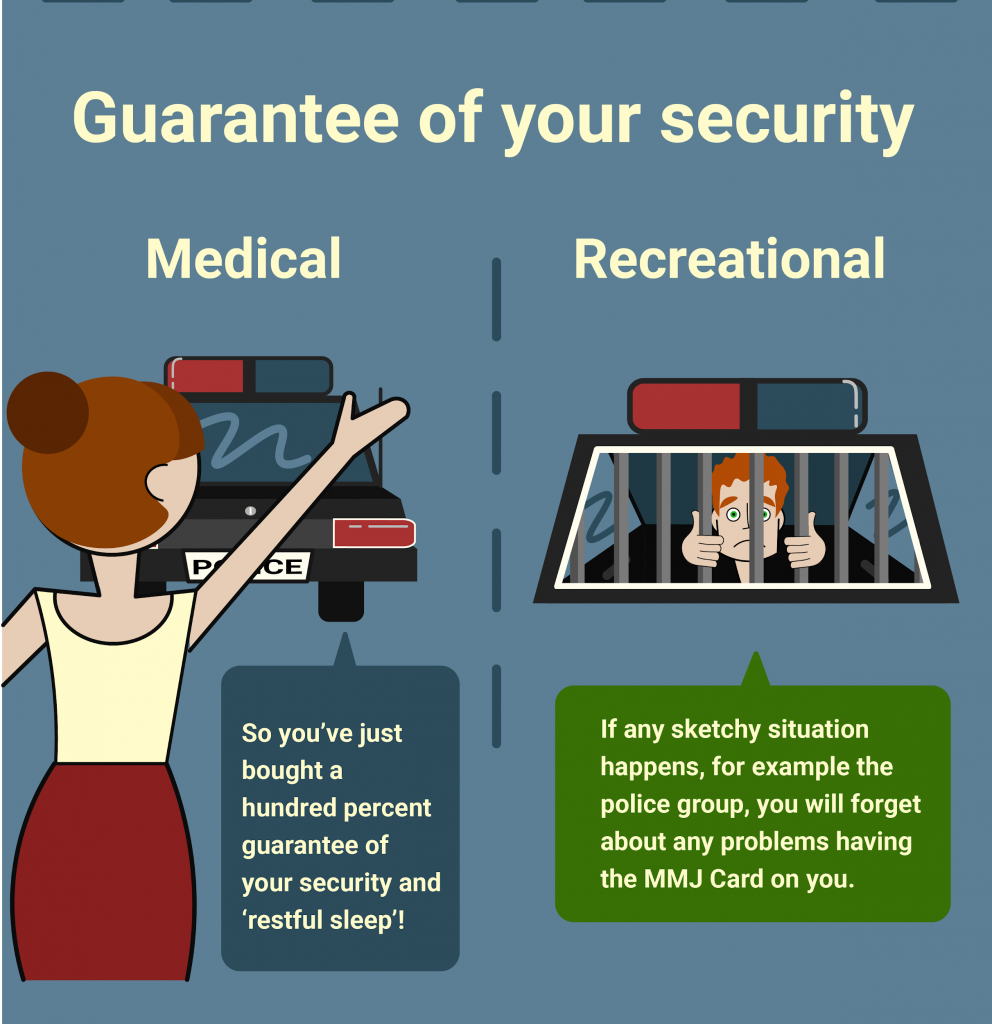 Another benefit of the MMJ card is that in most cases you’ll have any troubles with police. Here are some things to remember:

Recreational marijuana has much more rules, this is why even in the states where it is legalized it is better to have the MMC with you to stay on the safe side. 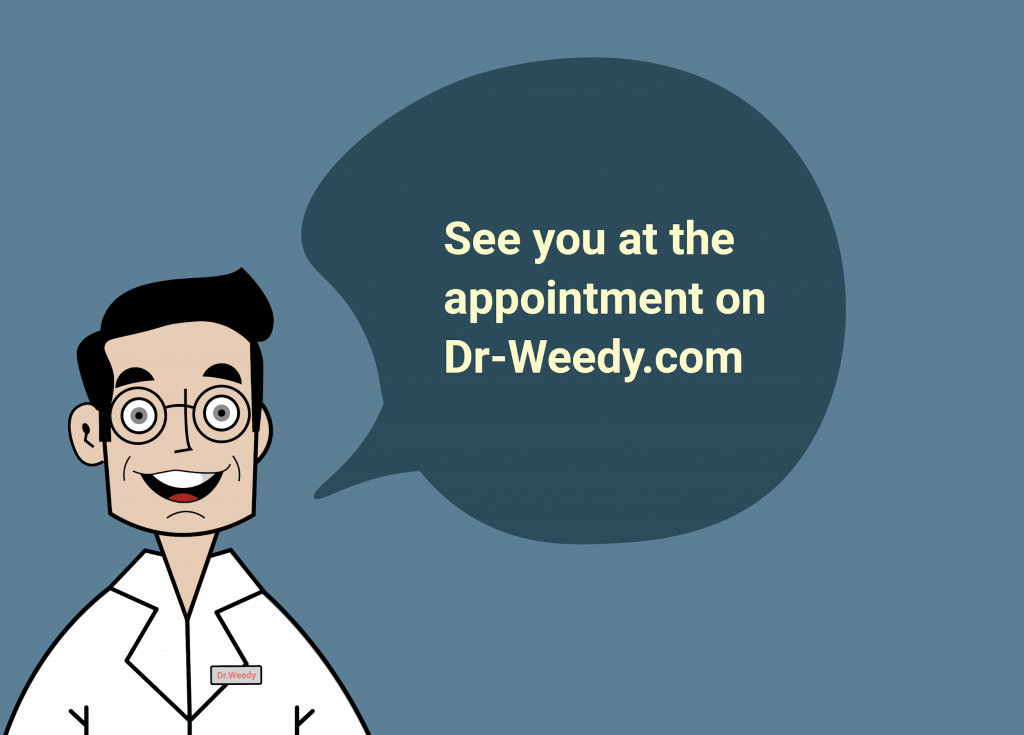 Both medical and recreational weed have their ups and downs, but medical one provides you with significant advantages:

Buy your weed from trusted and reliable suppliers, follow the rules, and enjoy your marijuana.